23,000 Ethiopians ‘Surrender’ in Saudi After Clamp Down

23,000 Ethiopians 'Surrender' in Saudi After Clamp Down

About 23,000 Ethiopians have surrendered to Saudi authorities since a clampdown on illegal migrant workers began in the oil-rich kingdom last week, officials have said.

The clampdown has led to clashes in the capital, Riyadh, with at least five people killed.

Saudi authorities say they are trying to reduce the 12% unemployment rate among native Saudis.

An estimated nine million migrant workers are in Saudi Arabia.

They are said to make up more than half the workforce, filling manual, clerical and service jobs.

Ethiopia's ambassador in Riyadh, Muhammed Hassan Kabiera, said the embassy had been informed by Saudi officials that some 23,000 Ethiopians had so far handed themselves in.

Some of them have already been repatriated, with the first group arriving in Ethiopia's capital, Addis Ababa, on Wednesday, reports from Ethiopia say. 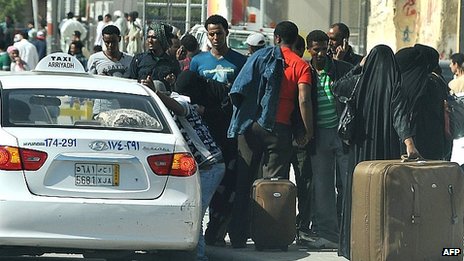 Many migrants do low-paid jobs in Saudi Arabia

Police said they intervened and "controlled" the situation, SPA reports.

Manfuhah is home to many migrants, mostly from East Africa.

On Sunday, Ethiopia's Foreign Affairs Minister Tedros Adhanom said he had information that three Ethiopian citizens had been killed in clashes since last week.

However, Saudi authorities say two foreigners have been killed, along with three Saudis.

Riyadh governor Prince Khaled bin Bandar bin Abdulaziz said the clamp down was aimed at illegal migrants, and not any "specific group".

"We will continue these campaigns until we ensure all residents in our country are staying legally," he is quoted by al-Riyadh newspaper as saying.

Earlier this month, the authorities began rounding up the migrants following the expiry of a seven-month amnesty for them to formalise their status.

Nearly a million Bangladeshis, Indians, Filipinos, Nepalis, Pakistanis and Yemenis are estimated to have left the country in the past three months.

More than 30,000 Yemenis have reportedly crossed to their home country in the past two weeks.