Nevsun Resources – A Copper Miner With A Juicy Dividend

Nevsun Resources – A Copper Miner With A Juicy Dividend 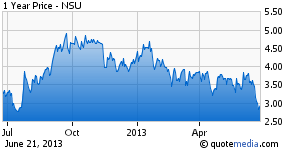 Nevsun Resources (NSU) is a mining company with a producing asset in Eritrea. Their 60% owned Bisha project is one of the highest grade mining projects in the world, according to the company. Bisha produced approximately 690koz gold in 2011 and 2012, and is forecasted to produce 110koz gold this year with 30-50M lbs copper, as the project is in a transition phase between gold and copper production.

In this article I'll first of all discuss Eritrea, as I think it's important to highlight the positive sides of a country only a few people will know. Secondly, I'll briefly talk about the future prospects of the company and potential acquisitions. Finally, I'll highlight my investment thesis why Nevsun is a good company which belongs in a diversified portfolio.

Nevsun operates the Bisha mine in Eritrea, a small country in East Africa. Since the war with Ethiopia about 15 years ago, the country enjoys a stable political situation as a single-party presidential republic. Most of the 5.7M inhabitants are Christians and about 40% of the population is Islamic.

As 65% of the GDP is contributed by farming and herding, it's a very poor country with -according to the International Monetary Fund- a GDP per capita of just over $500.

Fortunately for the Eritreans, there's an abundance of precious metals and base metals in Eritrea, and the government seems to be extremely supportive to foreign companies who are exploring and producing in the country.

I have the impression Eritrea is a very mining-friendly country (its mining code is actually based on Ghana's mining laws). According to the mining law, Eritrea gets a 10% free carried interest in any mining project, and is entitled to buy another 30% stake by paying the Net Present Value of that stake. So compared to dodgy countries like the DRC where the national sport seems to be nationalizing mining projects, Eritrea is a very attractive destination.

Eritrea has exercised its option to acquire 40% of the Bisha Project, and will pay $253.5M to Nevsun which will be settled from the after tax cash flows from the Bisha Mine. As the state of Eritrea is now a partner in the project, the political risk is quasi zero. Eritrea realizes it has to be very liberal to make it interesting enough to attract foreign investment in its mining sector.

Nevsun announced an updated production guidance for this year, and will now produce 110koz of gold and between 30 and 50 million pounds of copper in 2013, for a total revenue of approximately $250M.

This year is an important year for Nevsun, as the company is making the transition from being a gold producer to a copper producer, expecting an output of approximately 200M lbs per annum in 2014 at a cash cost of under $1/lbs of copper.

If we use a production of 110M lbs per annum [Nevsun’s 60%-share of 185M lbs per annum (applying a 7.5% correction to the company’s guidance)] and a fixed cash cost of $1.1/lbs (10% higher than anticipated), the next table provides a sensitivity analysis of Nevsun's cash flow compared to the copper price. As you can see, at a current copper price of $3/lbs, the project is very robust and will provide a lot of cash flow over the next two years, before Nevsun will make another switch when they will start exploiting the primary zone.

By using the current copper price of approximately $3/lbs, Nevsun's 60% ownership of the Bisha project will bring in approximately $210M in EBITDA. As Nevsun's current Enterprise value is approximately $220M, the company is trading at an EV/EBITDA multiple of just 1, which is ridiculously low. I expect Nevsun's working capital to be higher than its current market capitalization by the end of 2014.

In 2017 Nevsun will undergo another transition as the company will start to mine its primary zone. Nevsun's 60% share of the project should see an annual output of 15koz gold, 600koz silver, 25Mlbs copper and 150M lbs zinc. I consider this to be positive as I'm quite bullish on the future of zinc as several large zinc mines are set to cease operations over the next few years.

Nevsun Resources has installed a generous dividend, and has recently increased it from $0.05/ semester to $0.07/semester. Based on a current share price of $2.92, this represents a dividend yield of 4.8%, which is extremely generous for a mining company.

As the cash is piling up on Nevsun's balance sheet, it's quite likely the company will hike its dividend again next year, increasing it to $0.20 per year, which would be a yield of 6.85%.

Nevsun will pay its H1 dividend on July 15th, and will go ex-dividend on Wednesday June 26th.

As Nevsun currently has an enterprise value of approximately $180M and will make in excess of $200M per year in cash flow next year, I think this company is extremely undervalued right now. The downside is very limited as the company holds about $1.65/share in cash outside of Africa.

Nevsun has in excess of $400M in working capital, and I expect them to make an acquisition later this year, which should underpin the growth profile of the company. It will be extremely interesting to see which company/project they will buy, as I think they'll try to geographically diversify their operations. As the junior mining space is currently in a big crisis, Nevsun should be able to pick up assets on the cheap, and finance construction with the cash flow generated from its Bisha project.

By picking up Nevsun at the current share price, you get exposure to a highly profitable copper mine in Africa with a 4.8% dividend yield and the possibility for a further dividend increase.