June 23, 2020: Djibouti is the most expensive country in Africa while its neighbour Eritrea in the Horn of Africa enjoys the lowest cost of living, according to data compiled by the World Bank.

Djibouti ranks as the 60th costliest nation in the world, putting its commodity and services prices ahead of the rest of the continent. The most second expensive country in Africa is the Indian Ocean archipelago of Seychelles ranked at position 63 globally while oil-rich Angola completes the list of top-three economies on the continent with the highest cost of living.

This is according to the World Bank’s new cost of goods and services statistics collected under the International Comparison Programme, comparing 2017 data.

Nigeria and South Africa, Africa’s largest economies, are ranked at position 89 and 139 respectively on the list of world’s expensive jurisdictions.

The World Bank collects this data on prices across the globe to compare the levels of poverty and well-being of people across nations.

The bank works with statistical agencies of each country to gather prices on a set of commonly purchased goods and services, including food and beverages, clothing and footwear, housing, transport, communication and restaurant and hotels.

In East Africa, Tanzania has the highest cost of living, ranked at 125 worldwide, followed by Rwanda (130) while Kenya, the region’s largest economy, comes in third at position 133 globally. 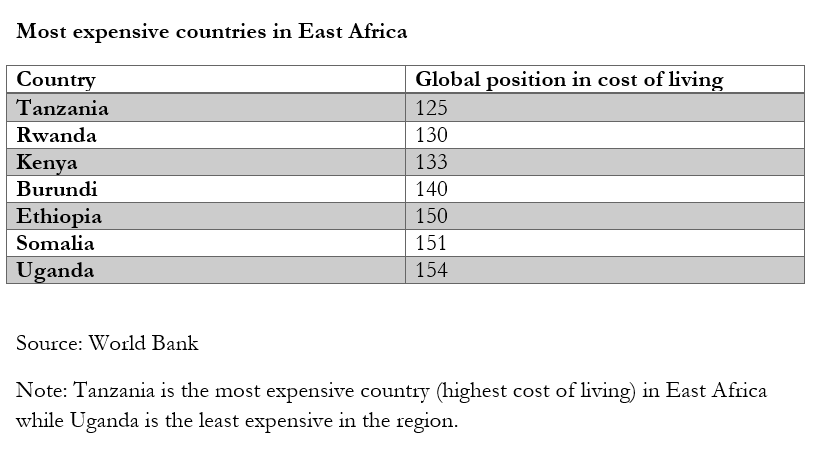 The most expensive country in the world is Bermuda, with prices about 105 percent above the global average. The Caribbean island is followed by Iceland, Norway, Switzerland and the Cayman Islands. On the other hand, Eritrea is ranked the world’s least expensive economy, where goods and services are most affordable.

In compiling the data, the World Bank recognizes that to better understand the living conditions of citizens of a nation, it is important to look at prices, not just income. When price data is used to adjust income or gross domestic product (GDP) – the monetary value of goods and services produced in an economy in a year – it is referred to as accounting for purchasing power parity (ppp). PPP is considered a better measure of the wellbeing of a population as it highlights households’ economic productivity and income levels.