President of ENFF Esayas Elected as CECAFA Board Member

Dec 18, 2019: The President of the Eritrean National Football Federation (ENFF), Abraham Esayas has been confirmed as a Board member of the Council of East and Central African Football Associations (CECAFA). 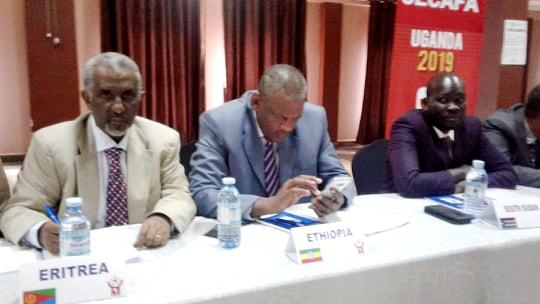 During the CECAFA General Assembly that took place at the Silver Springs Hotel in Kampala on Wednesday, Esayas and Rwanda FA boss Gen. Sekamana Jean Damascène were confirmed by the Assembly as Board members.

“I am ready to work hard with the team members for the betterment of football in our region,” said Esayas.

The new CECAFA President Karia thanked all members for the support and called upon all the members to work as a team.

The elections followed the new Statute as recommended by the Confederation of African Football (CAF).

Out-going CECAFA President Mutasim Gafaar advised the new team to work hard for more development of football in the region.