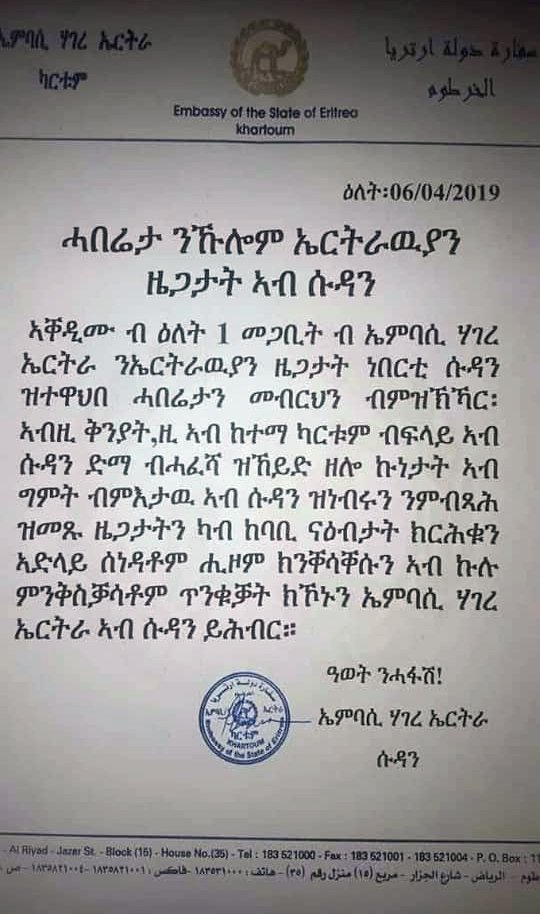 Eritrea has issued a security alert to its citizens in Sudan in the wake of mounting anti-government protests in the heart of the capital, Khartoum.

According to a statement issued by the Embassy of the State of Eritrea in Khartoum, citizens in Sudan and those travelling to are advised to limit their movements and take extra precaution.

The common border between the two neighbours was reopened only in February this year, at a time nationwide protests were piling pressure on Bashir’s government.

Addressing a crowd of supporters during a visit to the Kassala provincial capital near the border with Eritrea, Bashir said he was reaching out to Eritreans he called “brothers”.

“I announce here, from Kassala, that we are opening the border with Eritrea because they are our brothers and our people. Politics will not divide us,” he added.

Sudan closed the border in early January, 2018, after Bashir announced a six-month state of emergency in the regions of Kassala and North Kurdufan to help combat arms and food trafficking.

With respect to the ongoing anti-government action, the Sudanese army on Monday deployed troops around its headquarters as demonstrators besieged the premises.

Today marked the third day in a row protesters camped in the area which is also close to the presidential palace demanding the resignation of President Omar al-Bashir.

Reports indicate that tear gas was fired to disperse protesters. The protesters have been tasking the army to take their side and help oust the long-serving president.

Protests started in December 2018 and have since gathered steam. The army has not interfered in the repression of protest movements, led by the powerful intelligence service and riot police forces.

The country is currently under a state of emergency declared in late February to quell the protests. All regions are currently under the supervision of military generals. Bashir declared a 12-month measure which has since been halved by lawmakers.

Since Saturday, thousands of demonstrators have gathered outside the complex housing the army headquarters and the Ministry of Defence, not far from the President’s residence.

On Monday, soldiers reportedly set up barricades in several streets near the army headquarters to prevent vehicles from approaching, witnesses said. They have however not intervened against the demonstrators.

The Sudanese Security Council made up of senior officers from the army and other security services on Sunday called for the protesters demands to be addressed.