Video: In Libya, ISIS Is Using Human Trafficking to Finance Its Activities

In Libya, ISIS Is Using Human Trafficking to Finance Its Activities

A UN report, which was delivered to a UN Security Council committee, highlighted ISIS’ involvement in human trafficking networks

A new UN report has warned of potential collusion between human traffickers and state institutions in Libya, amidst further concerns that groups such as ISIS are exploiting these processes.

The 150-page report, which was collated by UN officials, was sent to a 15-member UN Security Council committee on Wednesday and documented how state security institutions might be working with smugglers to engage in illegal trafficking activities. 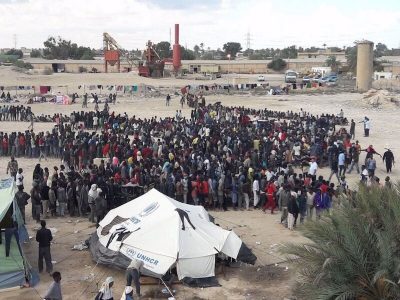 For several years, these smugglers have worked with complete impunity as they transferred thousands of people across the Mediterranean. Many of the people who undertook these dangerous journeys died as they attempted to made the perilous journey towards Europe.

In the report, Eritrean migrants told the UN officials that they had been arrested by the Special Deterrence Force (SDF) and then handed over to various smuggling networks. The SDF, which is an armed group affiliated with the Ministry of Interior of the UN-backed Government of National Accord (GNA), has thus far denied these allegations.

While questions of complicity between state officials and traffickers remain, fears are also growing that the so-called Islamic State are inserting themselves into these smuggling processes.

This comes as the group attempts to regain a foothold in Libya after its losses in 2016 and 2017. In mid-2016, the group was defeated in their onetime stronghold of Sirte by troops affiliated to the GNA and in late 2017, militants were finally defeated in the city of Benghazi by troops affiliated to the rival Libyan National Army (LNA), led by the General Khalifa Haftar.

While some see this as an opportunity for ISIS to gain prominence in Libya, others see it as a ploy by ‘gangs’ to exploit the current political and security instability to make money.

“Unfortunately, this exists. These gangs rob people and seek to make money illegally and criminally,” said Salah al-Din al-Jamali, the Arab League Envoy to Libya. “Therefore, the issue of trafficking in human beings must be viewed objectively and the security capabilities of the countries concerned – Libya and the Sahel countries – including Algeria, should be strengthened.”

Despite the prevalence of human trafficking, the Italian Interior Ministry announced that 3,500 people crossed from Libya to Italy this year, which marks a 60% reduction compared to this time last year.