The Church as a Therapy for Eritrean refugees

The Church as a Therapy for Eritrean refugees

Religion is important for Eritreans. More knowledge about the role of faith could help to integrate a large group of migrants who have difficulty making contact.

The inhabitants of the Schelle district in Zwolle are now used to it: the white Eritreans who come to the Sint Jozefkerk next to the shopping center in large numbers during the weekend. Eritrean orthodox believers have been serving their services in this Roman Catholic church for three years.

Sembetu Hagos (58), catering employee, is the one who made this possible. The Eritrean fled to the Netherlands 31 years ago and is himself a Catholic at the Sint Jozefkerk. She decided to help when she heard that the orthodox Tewahdo church, to which most of the Eritreans fled to the Netherlands, sought a place in Zwolle. “I asked for the key and took responsibility, and for two years I opened the church for them in the early morning and closed it in the afternoon.” 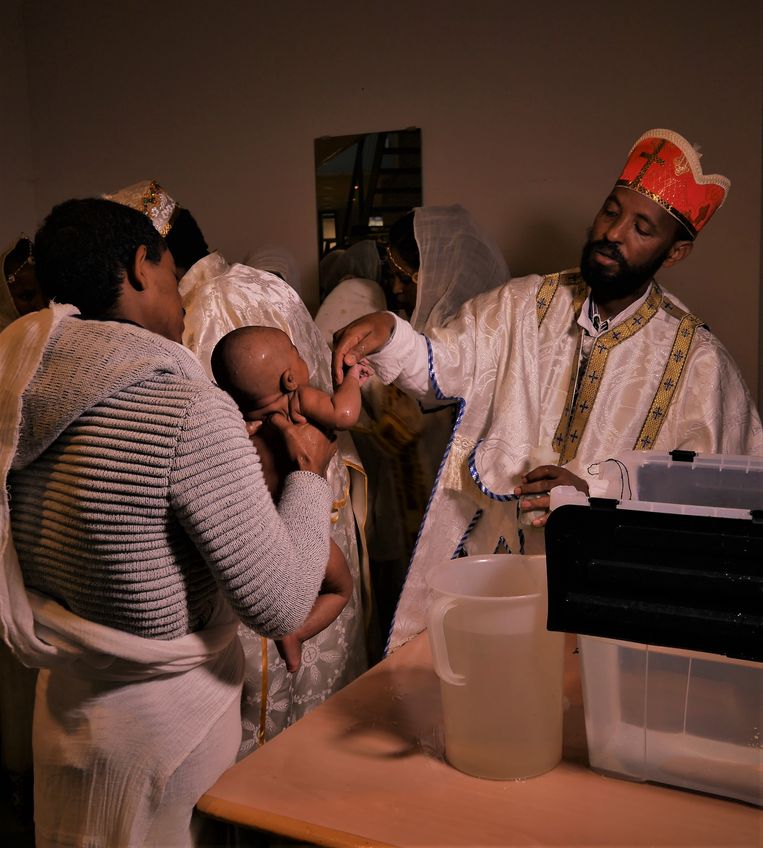 According to Hagos, the relationship between the two Christian movements is good. Nevertheless, there were misunderstandings, especially about the length of the services. In the orthodox church they last about five hours. But trust grew and the orthodox have the key themselves. “This new generation needs the word of God,” says Hagos. “They have experienced so much misery, and they are very young, too young, deep in religion, very different from us, it is a kind of therapy for them.”

After Syrians, Eritreans are the largest group of asylum seekers in the Netherlands – around 20,000 now live there. Their number will increase in the coming years. In Eritrea, half of the population is Christian and the other half is Muslim. Muslims who leave the country often stay in Sudan or the Middle East.

There are concerns about the integration of the Eritreans group that have come here in recent years. They are usually young – three quarters of the 12,554 Eritreans who applied for asylum between 2014 and 2016 are under 30 years of age, poorly educated and coming from the countryside. The transition to the rich West is great. Learning Dutch is difficult, so communication leaves much to be desired. They would also have to deal with infiltration and intimidation. Eritreans who need documents are forced by their embassy to pay diaspora tax. As a result, Eritrea’s agent in charge of the Netherlands was deported this month, a highly unusual measure to protect the Eritreans.

One of the visitors to the Tewahdo Church in St. Jozef Church is Ghebrezghi Zeratsion (40). With his friend Mohammed Abe (23) he is washed in the kitchen of Gift City in Zwolle, a meeting place that is run exclusively by volunteers and refugees. Heavy work, but they like to do it. Their laughter regularly sounds through the kitchen. “I have to do something, I feel tired from sitting at home,” says Ghebrezghi, who is actually a chemistry teacher. He met Muhammad two and a half years ago in the asylum seekers’ center, when they were both in the Netherlands. Meanwhile, Ghebrezghi’s family has also come over. Mohammed is Muslim, Ghebrezghi orthodox, but that does not stand in the way of their friendship.

In the kitchen Ghebrezghi and Mohammed practice their Dutch and they learn about the culture. Contact with the Dutch is not always easy to explain, they notice. Ghebrezghi: “They like to help, but there is a distance, with us you do everything together, they are busy with themselves.” The Dutch first thought they were ‘a bit crazy’. “They are not shy like us.” They have also learned that it is important to arrive exactly on time. “Your culture is very different from ours,” says Mohammed. “You are very open minded.”

Given Schotman accompanies the kitchen helpers in Gift City. “Eritreans are without any problems,” she says. “They are definitely looking forward to integration and know what they want, but saying ‘no’ is a problem, openness is a problem, and logging out is also a problem, because that is a negative message.”

The Knowledge Platform Integration & Society (Kis) came to the conclusion that the Eritrean community needs more help. There should be tailor-made support, more intensive integration, and increasing the informal networks. According to researcher Merel Kahmann there is a huge need for knowledge about this group. “For example, no role has been made in the role of faith, and I would very much like to know more about it.” Religion can provide an important network, both inside and outside its own group. “

In 2016, an Eritrean orthodox church in Rotterdam was in the news when more than twenty young women in the asylum seekers’ center in Orange became pregnant. After a visit to Rotterdam for the celebration of the Orthodox New Year, they massively aborted. The Coa would have received signals that the church was involved in abuse, but did not want to provide any further clarification. The Eritrean church denied any involvement and threatened a lawsuit. No declaration was made and the Ministry of Justice found no indications of a crime.

The church is important in Eritrea, says Ghebrezghi. “There are many saints’ days, for which we always go to church, which we would also like to do, but then we have to pay more rent and that is too expensive.”

They have no contact with Eritreans who have lived in the Netherlands for a long time. “Eritrean people who have lived here for 20 years have the dream to help develop Eritrea, but they do not know what it really is like us.” according to Mohammed. Ghebrezghi: “We are proud of the Netherlands because the man from the Eritrean embassy was sent away, and it would be better if other countries would do the same”.

For Sembetu Hagos, who has lived here for decades, the new Eritrean group is sometimes also strange. She regrets that there is so much distance between the old and the new refugees. “They do not even say hello to each other on the street.” You do not do that in Eritrea either, “they say, I always greet, even though I do not hear anything.”