A group of Israeli rabbis launched The Anne Frank Home Sanctuary, a program to protect African asylum seekers from deportation by hiding them from Israeli authorities.

There are currently around 40,000 African refugees in Israel, mainly from Eritrea, about 73 percent, and Sudan, about 19 percent, who are facing threats of expulsion after the Israeli government announced a plan to deport all of them beginning in April.

Africans targeted by the measure will have two options, according to Netanyahu: accept US$3,500 and a plane ticket or face prison. However, many organizations have documented and reported cases where asylum seekers face torture and human trafficking after being sent to countries like Rwanda and Uganda. 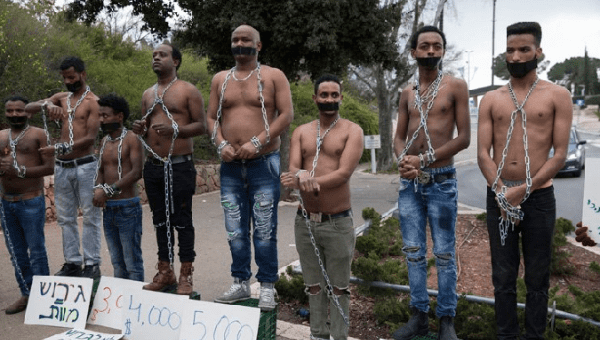 The organization that is organizing the Anne Frank-inspired program is Rabbis for Human Rights, an organization known for protecting Palestinians in the West Bank during olive harvest, when they are targeted by violent Jewish settlers. Anne Frank was a German teenager of Jewish heritage who became one of the most renowned Jewish victims of the Holocaust after her diary of her life in Nazi-occupied Amsterdam was published in 1947.

As part of their support for African refugees, the activists say they will launch a large-scale social media campaign labelling Israel’s leaders and ministers as racists

Refugees have also organized to oppose and protest Netanyahu’s plans for mass deportation. a group of Eritrean asylum seekers held Tuesday a mock slave auction outside the Israeli Parliament, the Knesset.

Two of the most important Jewish institutions in the United States, the Anti-Defamation League and the Hebrew Immigrant Aid Society, HIAS, have spoken against the measure. In a letter to Netanyahu they urged him to reconsider the decision arguing that it “betrays the core values that we, as Jews, share.”

The letter also regretted that “the sweeping nature of this deportation scheme, coupled with the extreme difficulty to access the Israeli asylum system is having a devastating impact on the refugee community in Israel.”

Other Jewish groups like the Reform Movements Religious Action Center and the National Council of Jewish Women, and human rights organizations such as Amnesty International and the Association for Civil Rights in Israel have criticized the measure.

The United Nations High Commissioner for refugees Filippo Grandi called Israel’s decision a matter “of great concern,” reminiding the Israeli government that “Israel has a painful history of migration and exile. New generations must not forget that refugees do not flee out of choice but because they don’t have any other choice.”