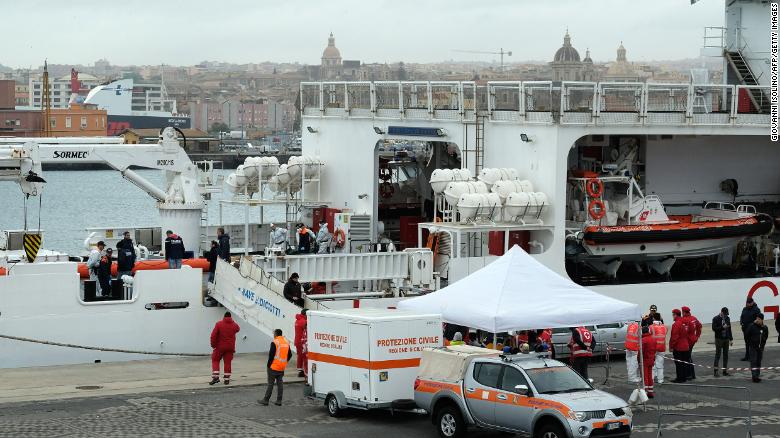 Rome (CNN)Sixty-four migrants are presumed dead after the rubber dinghy they were traveling in sank off the coast of Libya over the weekend, humanitarian groups said on Monday.

Flavio Di Giacomo, an International Organization for Migration spokesman, said on Twitter that there were 150 migrants on the vessel when it went down on Saturday, citing survivor testimony. He added that 86 people were plucked from the waters by the Italian Coast Guard. Di Giacomo said eight bodies were recovered and the remaining 56 are still missing and presumed dead.

This is the first reported Mediterranean shipwreck to claim migrants’ lives in 2018, according to CNN research.

In a statement released on Monday, the Italian coast guard confirmed it had rescued 86 migrants off the Libyan coast but did not go into detail on how many people were still missing. Italian authorities had said Sunday that a boat was spotted the day before by a patrol plane operating as part of a European anti-smuggling operation.

The humanitarian organization Medecins Sans Frontieres (MSF) said eight members of a family of 11 are among the presumed dead, along with the mother of a 3-year-old child who survived. MSF is assisting the survivors in the Italian port of Catania, according to a tweet on Monday.

With 3,116 deaths in 2017, the Mediterranean remained the deadliest migrant route in the world last year, despite a sharp fall in attempted crossings, according to the IOM. Of those, 2,832 migrants died on the central Mediterranean route.

Each year, tens of thousands of people pour across Libya’s borders, seeking to be smuggled onwards to European shores.

It has become a hotbed for human traffickers, whose network of smuggling operations have gone widely unchecked because of Libya’s lack of effective central governance.