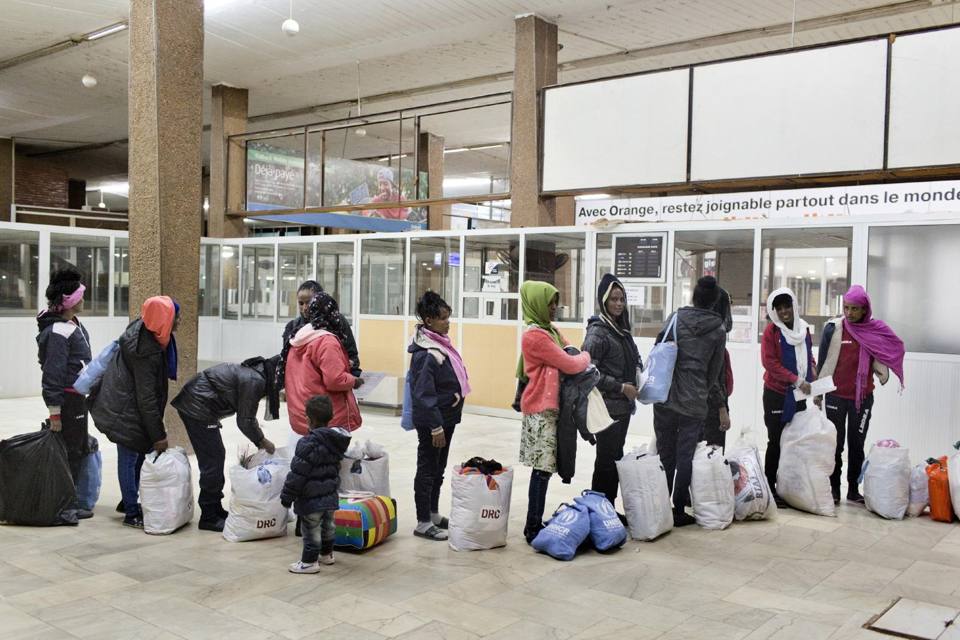 It seems that the Eritrean children arrived with the night flight from Tripoli have jumped all night on the bed, awake like crickets. One of the girls evacuated from the Libyan prisons had a panic crisis. Terrified, she feared she was pregnant and contracted AIDS in prison. Clinical tests have fortunately excluded these hypotheses. But the malaise will still be difficult to cure. “I no longer feel my body as my own. It is as if they had removed a tumor from the brain. Here’s how I feel “. (Prime Minister Gentiloni said that Italian troops will soon be deployed in Niger.) 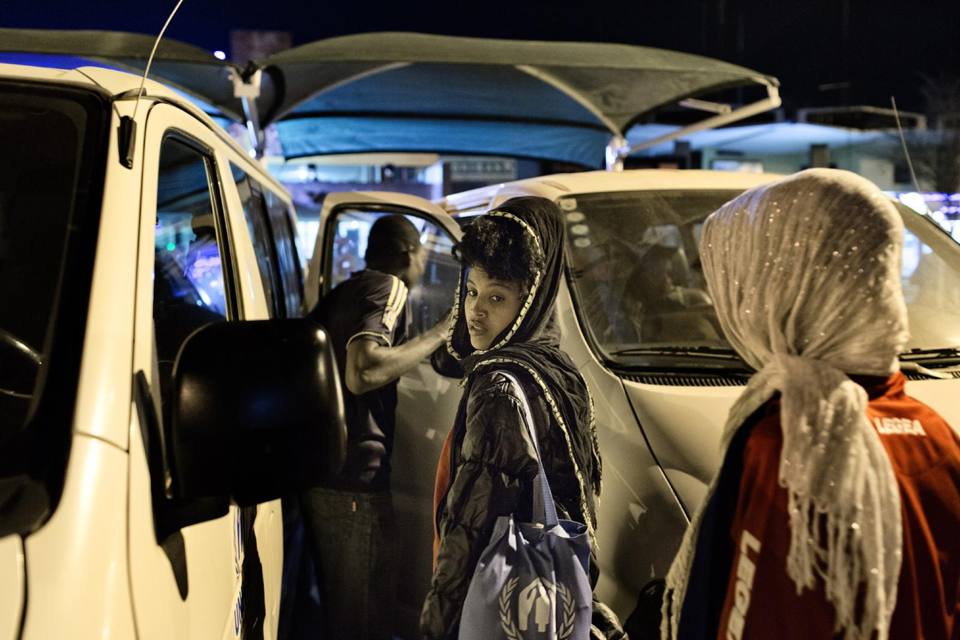 A 29-year-old Eritrean girl makes her testimony in brutally simple English. “The crossing of the Sahara was” the bad of the bad “, the worst of the worst: no water, nothing to eat, the sun so heavy, and then they beat us. It took us a month. But the hardest thing was Libya. They locked us up until we paid, I gave him $ 3600. So I ran out of money, and we left for the sea, but before we got there we were taken by Daesh, who held us prisoners for two weeks. They raped me, in two, I do not know who they were, they had their faces covered, I only saw their eyes (he stopped, he bent his head, he cries). They left us in the hands of another group. We were about 160. We arrived in Misurata, and after only one day the police arrested us. In the first 24 hours they gave us just a little water and a biscuit. Some day he came to visit us one of the ‘Iom and asked us how we were, bad, bad, we told him, but you want to return to Eritrea? no, not even dead … After 16 days in prison someone paid the police and took us to Sabrata. At night.

We stayed for a long time without drinking or eating. Once in Sabrata, the man who took us from Misrata threatened us “I paid for you and now you pay me if you want me to free you” “How much?” “5500 dollars”. But I did not have a penny anymore. My family is poor and mine, the 3600 dollars, had given it to the church. But he insisted: “I want 5500 dollars”. The thing went on like this: canned pasta for four months, and to drink salt water, and then every possible disease, cough, malaria, without ever being treated, no doctor for us. You were sick, you were dying, but I prayed to God that he would do my good and thanks to him I am still alive (he is interrupted again, moved). So they busied us to another place and asked for the money again. They put us in a house and from there the boys managed to escape and we were the only women left. Another place again, Ben Walid, then Zawiya. We were more than a hundred in the truck, then he chose thirty-two women, you come with me, the others do not know what happened to them, and he took us to his house, where he gave us canned pasta and some water . So he piled us in another place, where there were already a hundred and fifty blacks, little or no food, only water, and the baths clogged, but after two days I managed to escape from the bathroom window, along with others. In the middle of the night, we reached the mosque and asked the imam to call the police. At 9 o’clock the policemen arrived and took us to prison, we were well there, they gave us soap, shampoo, toothpaste, clean clothes.

25 days in a prison, then in another prison, in Tripoli, where I was visited by doctors, I had a pregnancy test, which luckily was negative, then the Unhcr registered us, and at the end they did brought here, to Niger. It was God’s work. And now I’m happy. Happy (crying) I was happy to leave Libya, and never to see her again, never go there even on vacation! (smiles ironically). At the airport we waited for the airplane. I had never climbed on a plane. I did not believe it. I was happy, too happy. How can I explain it. The house where they took us to Niamey is now beautiful. In my country only the rich have houses like this. So, it means I’m rich! “” And the other women? “We ask. “I do not know where they are. He had bought us. ” “What if a woman does not pay?” “They rape her. They do this: women rape them, men beat them and kill them. If there is a couple, husband and wife, she rapes him, they beat him or kill him. ”

He continues troubled. “Where are you from?” “Italians.” “Ah, Italians … at sea, what I have been looking for, how much I have looked for Italy!” She is in fact one of those blocked and brought back by the Libyan coast guard, according to the pacts between our government and the authorities of Tripoli. One would say that these poor people have only needs: on the contrary, they have also and above all desires, very simple, almost naive, that is, the desires of an ordinary girl, a girl with a normal life. “What would I like now? Sincerely? Here, I would like to go out already tonight, I would like to go dancing … ».

There are many questions I would like to ask the girls who arrived two days ago, but I know they do not want to talk or maybe just remember, how to blame them? As I start with Nardos, who will be my interpreter, towards the house that hosts them, I think that perhaps the least invasive way, is not to ask direct questions, I will not ask “What happened to you in prison?” more general «What happens to the women who stayed there?» inviting them to open without forcing them. I touch my forehead, it’s very hot and I feel very weak, but I think it’s tired. We arrive in the middle of a meeting with some of the operators who have come to welcome the girls’ requests and to inform them about the modalities of their temporary stay. They are sitting in a circle under a gazebo, close to each other.

They are often held by the hand. I hear them repeatedly asking the same question that seems to be the most urgent: a referent for their health problems, they want to be sure that there is a doctor to turn to. The German representative reassures them and adds that a doctor will visit them soon and that for emergencies will always be traceable and available. A very young girl is added to the group, she will be yes and no sixteen, she is holding a baby girl of two months, she has gone away to warm the bottle. I shudder to think how that creature was conceived and yet it is enough for me to see them together, mother and daughter, to understand how much love is capable of miracles. He holds her to him with such naturalness, there seems to be no other thought in her than having to take care of her daughter, and it is evident how that child is the anchor she clings to and, incredibly, the only beautiful thing to think about.

It is a lesson that I collect recognizing my limits, I do not know if I would ever be able to experience such a simple and high feeling. But it seems to be the joy of all that newborn, if they kiss each other, and smile with her for a moment abandoning their looks sad and suspicious. We talk about food, they all say they love meat but please, ask for one, do not give us chicken with paws, we do not eat this way in our country. They answer that it will be done and that they are organizing to set up a kitchen in which they will be able to cook their favorite dishes. The meeting is over, now if I want I can talk to them. I get closer, my head is spinning, I start to feel really bad. But I dare not say anything, it seems almost offensive to me my malaise in front of them, I only seek a little ‘shelter from the sun and sit next to the girls. I explain to them who they are and why they are here, they listen to me with kindness and without diffidence.

“It is important for people to know, it is for you and for the girls who have remained in Libya.” I ask the question I had prepared. The answer is dry, without appeal: “What happens to women in prison is bad and there is no better day than the other.” The girl sitting next to me looks at me and says that the feeling that has never left her was fear. “Even in dreams I was afraid.” She is so beautiful and so powerful is that load of beauty that I feel thrown on me. They are tired but do not shy away from my questions. I ask them to give a name to the relationship that binds them, they answer in chorus: “Sisterhood!” Then I remember a detail I had noticed the day they arrived: they all had a rose sticking out of their bags. Who gave them to you? They answer me that they were offered by the Unhcr boys who work in Libya and it seemed to me a gesture full of beauty. It’s late and I do not feel like pushing them any further. I get up to greet them and spontaneously approach to hug me, I struggle not to melt in tears. I’m hot with fever, they advise me to go immediately to the hospital to take the malaria test that you get here in a couple of hours.

I go there, it is negative, but I’m getting worse and fever goes up and our plane leaves in a few hours. I board after midnight for what will be one of the scariest flights of my life, but as I wrap myself up like a cocoon in the blanket to try to calm the shivers, I notice Thenat, one of the girls we had met on the first day in the “Case de passage”. I can hardly recognize her, her look is so different now and I’m sure it’s not the fever that makes me notice the spark of happiness that shines in her eyes. Then I close my eyes, and I finally try to sleep. 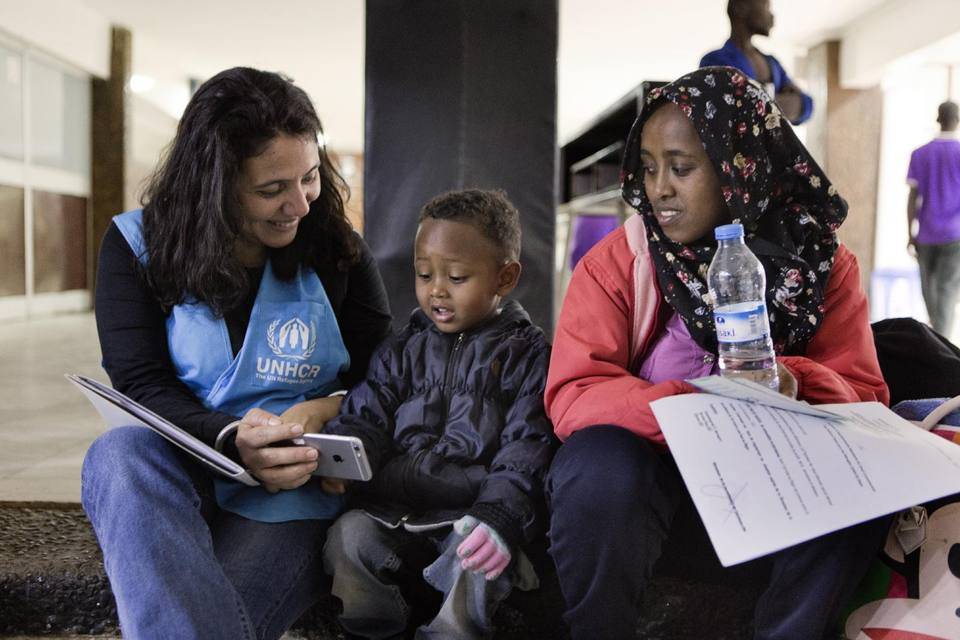