In a strong performance, Mamu clocked 41:35 over the 10-kilometre course with an ascent of 710 metres and ascents of 350 metres, just three seconds shy of the course record.

“I’m really happy with the victory,” Mamu told Slovenian news portal Siol.net. “This season was a very successful one for me.” 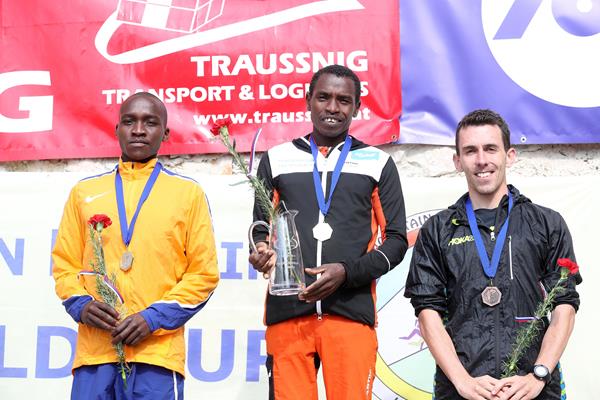 Victor Kiplangat of Uganda, this year’s world junior champion, who led over a portion of the the descent in the middle part of the race, later faded to finished second, 50 seconds behind the winner.

Andrew Douglas of Great Britain was third, 27 seconds behind Kiplangat.

The victories sealed the 2016 World Cup titles for both Mamu, who won the series crown in 2014, and Mayr, who dominated the women’s race as much as she did during the entire mountain running season.

Mayr, who raced to the world title in Bulgaria early last month, won here by more than three minutes in 48:42. That performance came despite a bad fall which left the former marathoner battered, bleeding and bruised as she crossed the finish line.

“It’s nothing serious,” she said, explaining that her spill came after she glanced at her watch during the last descent to see if she was still on course record pace.

Alice Gaggi of Italy was a distant third in 51:46. Slovenia’s Karmen Klancnik was third, nearly five minutes behind Gaggi.

Nearly 200 runners from 11 countries took part in the event on Smarna Gora, one of Slovenia’s most popular mountains among hikers, runners and walkers, which sits on Ljubljana’s northern outskirts.

Organisers and Bob Ramsak for the IAAF