Several people are feared dead in clashes in north-western Ethiopia between police and anti-government protesters, amid a wave of unrest.

On Friday police arrested dozens of demonstrators during massive rallies in the capital, Addis Ababa.

Since last November the government has been facing protests from the two largest ethnic communities over alleged human rights abuses and other issues.

Despite the ban, people took to the streets in several parts of the country for a third consecutive day on Sunday, Emmanuel Igunza reports from Addis Ababa.

The worst violence took place in the north-western city of Bahir Dar in the Amhara region – the homeland of the Amhara people.

Police used tear gas and fired in the air to disperse thousands of people who had blocked roads and chanted anti-government slogans.

Unconfirmed reports say several people were killed. One resident told the BBC he had seen a friend being shot in the head by security forces.

The Oromo protests and Ethiopian unity

The unrest was sparked last November by a plan to expand the capital into Oromia. This led to fears farmers from the Oromo ethnic group, the largest in Ethiopia, would be displaced.

The plan was later dropped but protests continued, highlighting issues such as marginalisation and human rights.

Oromo activists say police have killed hundreds and arrested thousands of people from their community in recent months.

Ethiopian security forces shot tear gas and closed roads in major cities throughout the country on Saturday as demonstrators protested against land reforms and alleged human rights abuses being carried out by the government.

Additionally, two protesters were killed in clashes with police in the old city of Gondar over land disputes Friday. The Israeli Foreign Ministry in Jerusalem issued a travel warning for Israelis against travelling to the city. The city was the center for Ethiopian Jewry, and many Israelis travel there to see what Jewish life was like in the east African nation.

On Saturday, Hundreds of people gathered in Mescal square in the center of Addis Ababa only to be dispursed by the police. Protests also broke out in the towns of Waliso and Ambo, both in Oromiya province. Eyewitness reports say that soldiers closed the roads and shot in the air. There is a large university in Ambo. 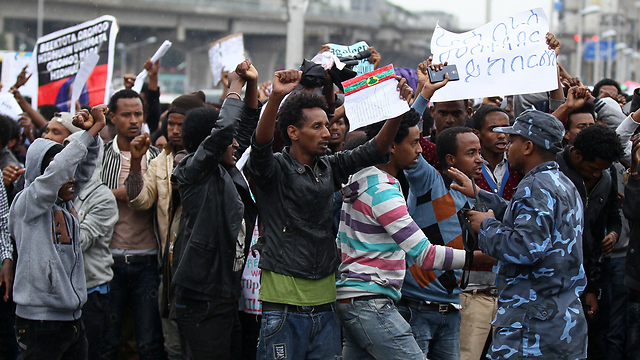 There are reports that the internet in Addis Ababa has been cut. It is not yet clear if this is due to the government.

There have been several protests in the central Oromiya province of the country demonstrating against a plan to annex some of the territory in order to expand the Ethiopian Capital Addis Ababa.

The catalyst for demonstrations in Ethiopia is a controversial land development plan put forth by the Ethiopian government which was designed to help investment and industrialize the Ethiopian agriculture sector. Small protests erupted when the plan was originally developed in 2014. 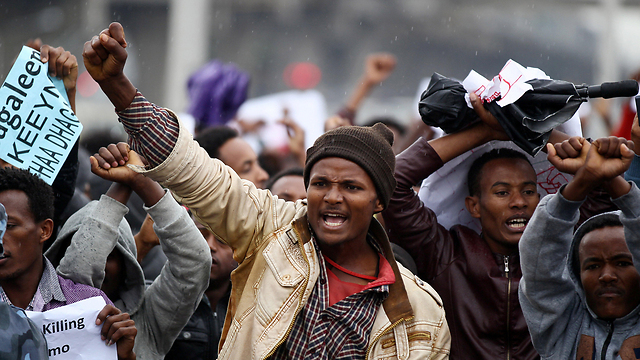 The plans were shelved following fierce opposition from the residents of the area, yet there are continued protests due to alleged violations of human rights. The protestors want people arrested during the demonstrations to be freed.