The Oil, Gas and the New Interest in Eritrea

The Oil, Gas and the New Interest in Eritrea

Eritrea is sitting on a treasure. And Asmara knows. That treasure is its rich deposits of oil and gas that are both on the ground, especially offshore. For the time it has not begun exploitation, but started the courtship of the Government of Isayas by large mining companies and politicians and former politicians. 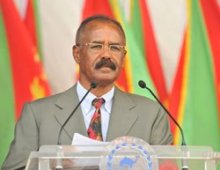 But first things first. The presence of gas and oil is known for decades. The first prospecting were carried out by the Italians when Eritrea was still a colony of Rome. The Italian engineers dug eleven wells on land and in eight of them found hydrocarbons. Some twenty years later, still Italians They carried other studies, this time offshore, near the Dahlak islands. And, also in this case, they are found both oil and gas. The discovery was confirmed by drilling conducted by Mobil in 1969. On that occasion, the technicians caused an explosion and the gas emitted from the crater for about two months.

But because the deposits were never exploited? First, because the political situation in Eritrea and military for decades has been anything but stable: the first because of the thirty-year war of independence with Ethiopia and, then, in the nineties and noughties, for new conflicts between Asmara and Addis Ababa and Djibouti. These wars, in addition to impoverish the country, have in fact isolated from the international community. In the second place, they were missing and lacking the infrastructure to transport and store hydrocarbons. Finally, because until the sixties, the gas had no market.

In 2008, however, the Government of Isayas Afeworki has signed an agreement with two Chinese joint ventures and Eritrean drilling areas on the border with Sudan. But, knowing that you have under your feet a huge treasure, Asmara not admit it and denied the presence of hydrocarbons in the subsoil. In 2010 alone, the government has declared to possess a treasure and the Ministry of Energy and Mines has carried out a mapping of potential deposits. The two volumes that have been made ​​should now help investors in identifying more precisely the places where you can dig wells. Meanwhile, the ministry is committed to restarting the refinery in Assab and build a new one. In February 2015, Eritrean officials were present at the Red Sea Oil and Gas Summit in Dubai. At that confirmed the strategic interest of Asmara in promoting and developing the oil and gas sector as a portfolio essential for economic growth of the country.

The recognition of the existence of the wells has attracted the attention of mining companies, countries and foreign politicians. On the territory are already multinationals Exxon and Mobil (US), Shell (UK and the Netherlands), Total (France) which, for a long time, distribute oil products in Eritrea. Very active is Michael Howard, British politician, a member of the Conservative Party. In 2014 he drove in Asmara a group of entrepreneurs interested in investing in the hydrocarbons sector. Howard in the past has been involved in a corruption case of Somali politicians to get concessions drilling and extraction of oil in Somalia.

And Italy? Although in the past there have been political friction, our country is still the largest trading partner of Eritrea. In the summer of 2014, Lapo Pistelli, then Deputy Minister of Foreign Affairs, paid a visit to Asmara during which he met Isayas Afeworki, has shaken hands and announced that between Italy and Eritrea would have been a new bilateral relationship. In November 2014, Lapo Pistelli has always played an important role in engaging in Asmara Khartoum Process, an initiative of the African Union to contain the flow of migrants from the Horn of Africa. The solid friendship between Pistelli and Eritrea, as noted in an article in the British newspaper The Guardian. Who knows if it will produce fruit even now that Lapo Pistelli became Vice President of ENI, the Italian company active in the oil, natural gas.