The lone seven-year-olds leaving home and country behind 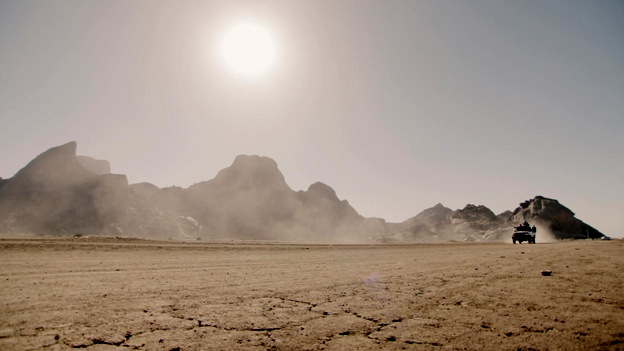 Children as young as seven are travelling thousands of miles alone, across land and sea – some are sent by their parents who don't want them to grow up in repressive countries such as Eritrea. Others end up being turned into inexperienced captains of rickety boats crossing the Mediterranean.

We are following criss-cross tyre marks across a dust plain. An abandoned shepherd's hut slides by, bleached cow carcasses, plastic bags snagged on stones, the rest is desert and sun and choking hot air.

I'm told that in the summer these borderlands between Eritrea and Sudan are fertile green, but right now the dust spins up behind our car and hangs in high grey plumes, before floating back to earth as powder rain.

This barren landscape is, for some, the start of a journey that will take them 4,000 miles, across desert and sea, along the world's most dangerous migration route.

To call it "a route", though, is somewhat misleading, it's really a tapestry of routes across sub-Saharan Africa, threading out of every country in the region, northwards towards the Mediterranean Sea. There are as many starting points to the journey as there are reasons to join it. But the one we're travelling is becoming one of the busiest. It's the route out of Eritrea, Africa's most secretive state. 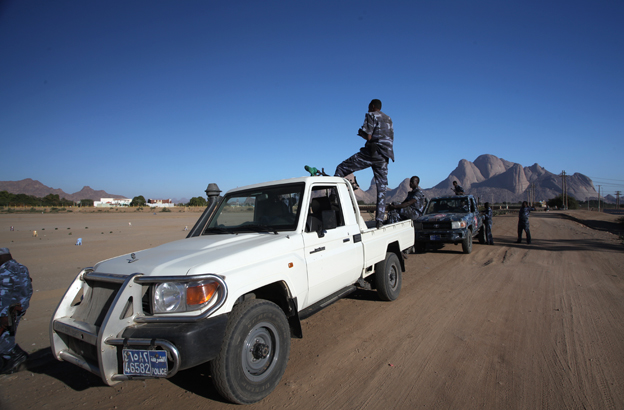 Migrants cross the border into Sudan, sometimes travelling in cars and trucks, but often simply walking, usually at night when the air is cool and they can hide from the police patrols.

And it's in Shagarab Camp that I come across something remarkable. 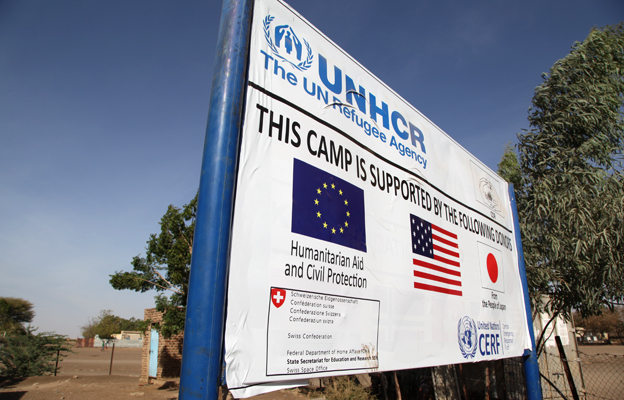 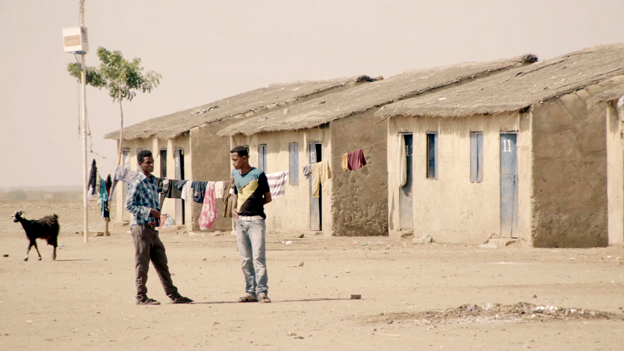 Behind a metal gate, where security guards are checking people in, is a group of around 70 children sitting on benches in the shade. What's remarkable is that these children have travelled to Shagarab Camp alone. No parents, no family. And some are as young as seven years old.

They sit and listen as UNHCR official, Sarah Elliot, explains the dangers of the route they're travelling.

"How many of you walked here?" she asks.

One hand goes up, then another, there's some giggling, then everyone raises a hand.

"OK, where are you trying to get to?"

The children look at each other. Some of the girls are wearing colourful headscarves which they've wrapped across their mouths against the dust.

"Go on, where? Don't be shy," smiles Elliot. She's asked the same question many times before, and already knows the answer. 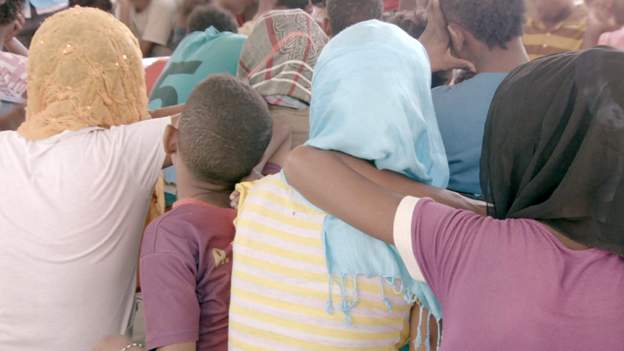 Elliot nods and smiles some more. "OK, I understand, but do you know how long it will take?"

None of the children respond, they just fidget and wait for an answer.

"It can take many months," says Elliot, "and do you know how dangerous it is?"

Some of the children stare at the floor, others whisper to each other.

"Because that's what I'm going to explain to you today," continues Elliot, "just how dangerous this route is."

And on she goes, telling boys and girls, many of whom have barely reached their teens, about the dead bodies in the Libyan desert, about the people traffickers who might steal their money, about the men who kidnap children, about how many migrants drown attempting to cross the Mediterranean Sea – 4,000 last year, and already this year, the numbers are on a scale never seen before. 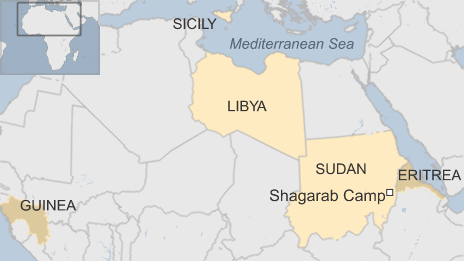 The flight of children from Eritrea is an indication of just how oppressive the regime there has become. Older boys and men in the camp describe compulsory open-ended military service lasting from 10 to 30 years, including year after a year of forced labour on farms or in factories.

Parents are so desperate to spare their children this fate that they are taking the agonising decision to tell them to flee – despite reports of people being shot on sight as they attempt to cross the border.

"Do the children listen to your warnings?" I ask Elliot later. "Does it put any of them off?"

She screws her face and looks off across the desert. "Not as much as I'd like. I mean, maybe some. But by the time they arrive here, most of them already have a plan, and the plan is to get to Europe."

It's winter in Sicily and a cone of snow has settled over the tip of Mount Etna. Below, on a blowy beach, is a boy called Rudi. He's wearing shades with indigo lenses and Elvis rims, and his hair is knotted in junior Rasta twists. Rudi fiddles with his headphones.

"What are you listening to?" I ask. He stares at me, a little confused, "Nothing," he says, and then shows me that his headphones aren't plugged into any device.

"It's just for the look," he says, and saunters off in his oversize trainers and his hang-low jeans. 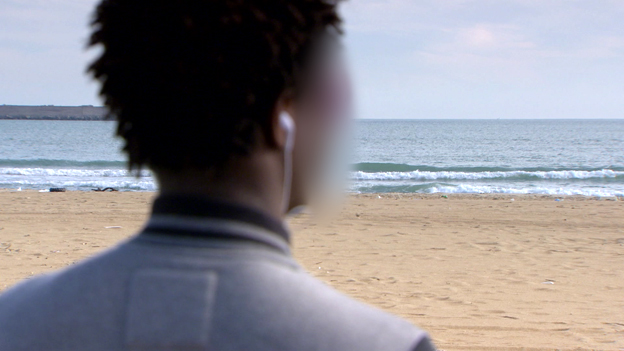 Rudi is eager to look and behave like other Italian teenagers – he just wants to fit in but his starting point couldn't be further from theirs. Rudi is a teenage people-smuggler, one of the youngest ever caught by the Italian authorities, and he started his life in a small village in West Africa.

What propelled 15-year-old Rudi out of his family home in Guinea, to embark on the world's most dangerous migration route is unclear, but what we do know is that he never set out to be a people smuggler.

His journey across the Sahara was relatively uneventful, but it was when he arrived in Libya that things took a turn.

Libya is still the most popular departure point for Europe, despite the conflict.

In fact the lawlessness has increased the migrant traffic through the country because the people smugglers can now operate with impunity. There are more of them, with more routes on offer.

They told me that if all the passengers survived, then there'd be no trouble but if anyone died, then I would be arrested”

When Rudi arrived on the Libyan coast, he'd run out of money. He describes fighting, and the sound of gunfire, and being terrified, as anyone of his age would be.

In the past, migrants would find work in the warehouses and meat factories of Tripoli to help pay their passage, but now there's none of that. Rudi pleaded with the people smugglers to take him for free, but they wouldn't. The only way he could get across, they told him, was if he captained the boat himself.

Over the following days, the smugglers taught Rudi how to steer a wooden boat, how to operate its engine and how to navigate. He practised up and down the coast of Libya, and after a week, they said he was ready.

Rudi tells me that if he hadn't agreed to sail the boat, he would have been stranded in Libya and could have been kidnapped or killed.

The arrangement suited the people smugglers well. They took nearly $500,000 (£325,000) from the migrants, and stayed in Libya, so they didn't run the risk of being caught by the Italian authorities. All the risk was with Rudi, and his passengers, of course

"They told me that if all the passengers survived, then there'd be no trouble but if anyone died, then I would be arrested," he says.

And so, when he arrived off the Italian coast, and was intercepted by the coastguard, Rudi punched the air like he'd scored a goal. He was surprised when the police took him away.

Now, Rudi is looked after by a charity in a picturesque Sicilian town, where he plays football and wears headphones that aren't plugged in. The Italians didn't prosecute him because of his age, and now they have an obligation to protect him and to integrate him into Italian society – he's a child of course, as well as being a one-time people smuggler.

Paul Kenyon is a correspondent with BBC Panorama, and has written a book about the world's most dangerous migration route – I am Justice.