The US-based group says former prisoners at the main detention centre in Addis Ababa described being beaten and kicked during interrogation.


It accuses Ethiopia of using anti-terrorism laws to stifle dissent.

The government has dismissed the report as biased and lacking credible evidence, according to AFP news agency.

The report by HRW says police investigators at Maekelawi prison use illegal interrogation methods, keep inmates in poor detention conditions, and routinely deny them access to a lawyer.

Former detainees reported "being held in painful stress positions for hours upon end, hung from the wall by their wrists, often while being beaten", it said.

"Beatings, torture, and coerced confessions are no way to deal with journalists or the political opposition." 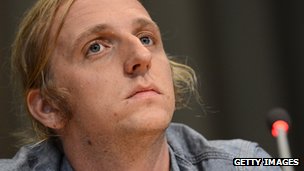 She called on the Ethiopian government to "root out the underlying culture of impunity".

But Ethiopian authorities said the report was "extremely biased and ideologically marred".

"They haven't come up with any proof," government spokesman Shimeles Kemal told AFP. He criticised the study for basing its findings on testimonials from 35 former inmates and their families, rather than an on-sight investigation.

Among the former inmates interviewed was Martin Schibbye, a Swedish journalist convicted of entering the country illegally and supporting a rebel group.

Protesters took to the streets in the Ethiopian capital in June to demand the release of jailed journalists and activists.

It was the first major demonstration in Addis Ababa since 2005 when hundreds of protesters were killed in violence.